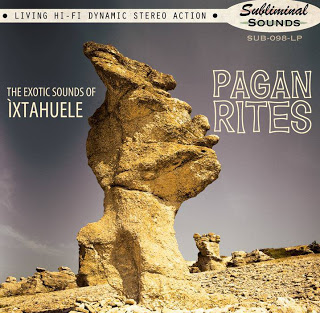 it was cuba libre night with mates tonight
and this was infact an exotic five star inspiration!!!!
Long live summer!
Subliminal Sounds
official

ÌXTAHUELE is a Swedish exotica band playing in the acoustic, original style of Martin Denny and Arthur Lyman. They come from Gothenburg; a damp, foggy harbor town that ever since its founding in the early 17th century has been an international melting pot and that has been associated with exotic, faraway destinations ever since the days of the East India Trading Companies. Having grown up with the exciting tales of the sailors and the luscious smells and flavors of the markets, an interest in the romantic and exotic is an integral part of life for the group.

Coming from a variety of musical backgrounds, ÌXTAHUELE strive to combine an immersive, research-like approach with their collective experience in jazz, pop, surf, classical, Latin and world music to create authentic, exciting, and innovative world-class exotica. A large part of their inspiration and style clues come from the old greats (Baxter, Denny, Hunter, Rains, etc.) but they are also heavily influenced by classical works, Latin & jazz tunes, indigenous melodies from different regions – in short, the same kind of influences that inspired the originators of the genre.

The aim of the group is to provide the perfect soundtrack to bring your mind’s eye on a time-traveling, round-the-world trip; taking you to faraway exotic islands, lost lands, and ancient cities – bringing back the Ottoman Empire, Port Royal, or even the mythical continent of Mu. ÌXTAHUELE try to push the limits of where they can take you while still staying true to the genre; because after all the true armchair traveler can’t make the Hawaiian Village the destination for every trip, but must also go to the Amazon, Micronesia, the Middle East, the Caribbean, and Indochina. All aboard!

BLAUW – You Looked Up

Toledo – On My Own