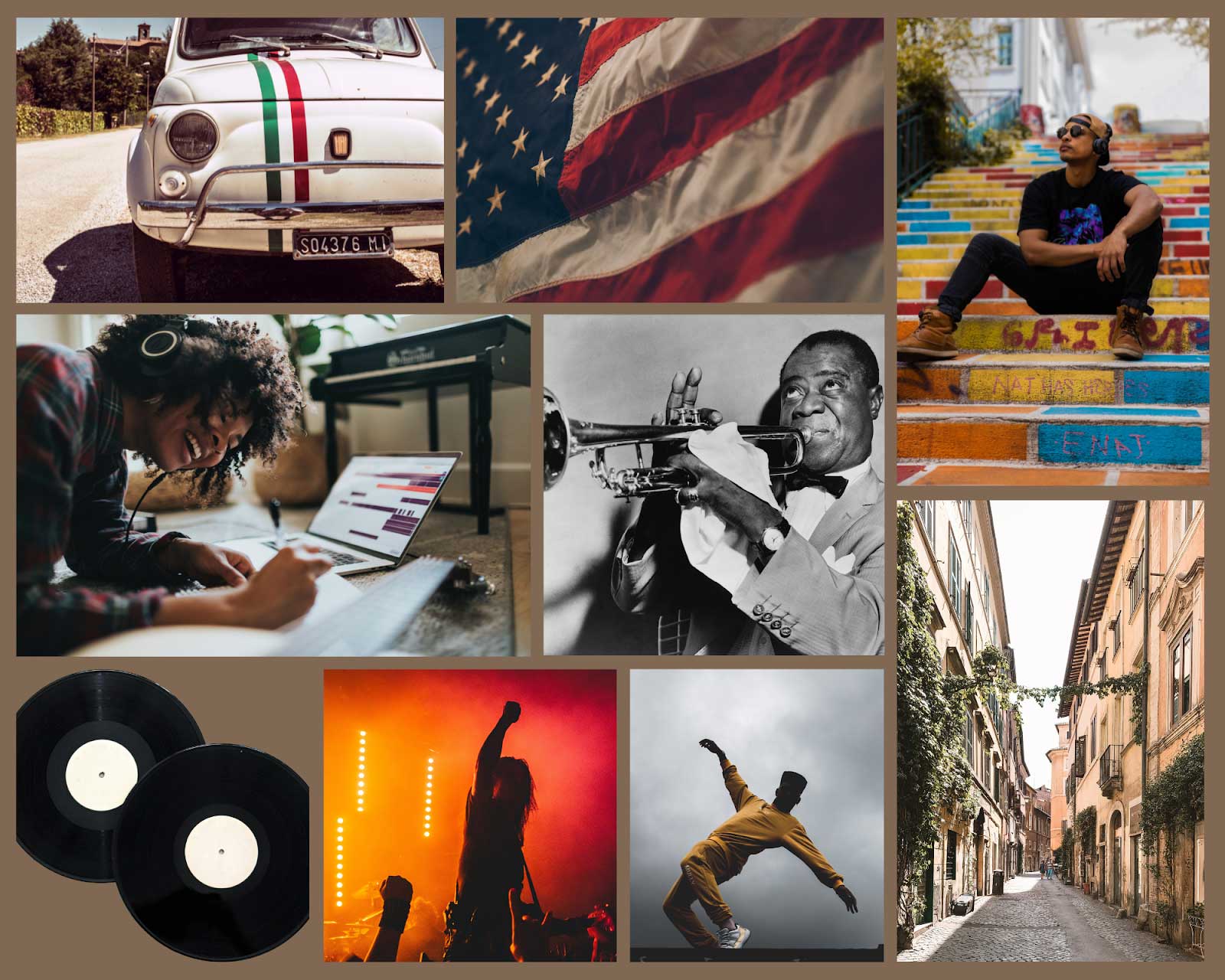 The strings of a harp, the cries of a violin, the patter of the rhythm, the tempo dragging its feet, you look up, and you see through the eyes of Mina Mazzini, and there it is, what she sang so deeply about, the sky in a room (Il Cielo in una stanza). You gaze, you reach out to a star in hopes to fulfill your amazement, and just as the heavens pull you in… your headphone unplug, you abruptly hit the ground and stay there sulking.

For the past year and a half now, I have been spending my early adulthood in Rome, Italy. Music has always been a constant in my life, so when I made the decision to move to Italy, Italian music was something that was never on my radar, aside from the music we heard growing up in Italian American classics or Italian songs that have been translated and performed by Famous American Singers from the 50s. I heard my 1st songs in an elementary Italian course; Capelli by Niccolo Fabi, Amor Mio by Mina Mazzini, L’Italiano by Toto Cutugno.

As an American, it was a moment of my exceptionalism was showing; as much as we try to deconstruct our thoughts as Americans, in little ways, we see that our conditioning of being the global standard still appears. The songs were great but (at the time, I felt they had) no reflection of the zeitgeist of our current times. Perhaps I’m missing a bigger picture; I began to look for more modern songs, maybe even songs that mesh between Italian culture and my own Culture and felt that perhaps Italian music was just behind. But to understand Italian music, I began to pick at American music. American Music is constantly changing, a constant reflection of someone’s mind, the mind of a community, the mind of society. It sings and wales about its current times, throws a fit, then writes a love song.  It can also be loud and empty, meaningless at times. Popular songs are being pushed though it may give no substance at all. One thing is certain that its defusion is unmatched.

I began to pick at the thoughts of peers, being that we all came from different states, countries, and cultures. I started with my dear friend from Angola, Clayton Perdo, who studies at Luiss University in Rome; with his 1st language being Portuguese and living in the states for a few years, I was interested in this preference. “Italian music is a lot more romantic in just about every genre. I prefer American music because you find more mixtures of different styles “, he told me, “… American music is a big influence in my home country. It ties into what the rest of the world thinks American culture, wealth, and society are like. Personally, being that I lived in America for a bit, I knew that art wasn’t always of reflection of real life.”, he ended.

“…Majority of American music is in some sort of English dialect, Spanish or native tongue.  I do not prefer either as my music taste is eclectic… Opera has always been a music that has been a part of my life.  Many can say Italian opera has marked the classical music world, and it is widely appreciated in Latin America to this day.  Much of the overlap happens in the arts between the two cultures. This is one example. ” was the response of Daniela Alba Ramirez, a Master’s student at the American University of Rome.

“Comparing the music I hear on the radio in Italian grocery stores to the music I hear on the radio in the U.S., there are a lot of shared components. The biggest difference is the language itself—but Italian music is more likely to have English peppered in than American music having bits of Italian in it. I like when artists sing in a style I find pleasing. In fact, Lucio Dalla’s “4 Marzo 1943” is one of my all-time favorite songs. Rino Gaetano is comparable to Bob Dylan, and I like both. Fedez sings fun pop songs I enjoy. Maneskin sings in English and Italian, and I adore their Elvis cover. For me, the music depends on the mood I’m in. Sometimes I’m feeling like Italian and sometimes English. But other times, I don’t sort by language but rather style.” Said Abigail Milovancevic, another student at the American University of Rome.

When listening to Italian music, you must have a good relationship with the language. Understanding Italian is helpful for sure; of course, there are those songs that go beyond language and reach you anyway, but the logic of the language brings about a whole new level of appreciation. “First and foremost, the language is the main difference…I began learning Italian in high school, and Italian music has helped me immerse into the language and learn it well. Starting with old Italian arias all the way to Laura Pausini and back to Italian rap. It is a way of feeling cultural and linguistic tones that are otherwise unreachable in a classroom setting. “ Said, Alba.

“After moving to Italy, I took it upon myself to master the language. Right now, I’m still working toward that goal. Music has been a way I envelope myself in Italian.

I took Italian through music last semester. This introduced me to some well-known Italian artists such as Vasco Rossi, Lucio Dalla, and Jovanotti. The cultural aspect has helped me understand Italian further than just words. For example, “Je So’ Pazzo” from Pino Daniele was my first exposure to the Napoletana language/dialect. Daniele, in particular, helps me anchor to a specific place within Italy. It strengthens my understanding of listening to dialects from all over the country. “ Said Milovancevic.

One thing is certain is that these differences are a reflection of the structure, history, language, culture, and government of a society. I think student Anthony Omijeh, who has lived in several countries throughout his life, sums it up simply for us. “…who’s to say Italians don’t have the “ culture”,  music is what you sing,  rap, dance about is the aspect of what you like, the type of story you tell.” This statement holds many truths; It took me living in Italy and, in some ways, “becoming Italian” to appreciate the music and for it to be a staple in how I want to live my life. I want my life to take its time like an Italian song. Italian Music is soulful, prideful in Italian identity and almost always tells a story; Italian music is its own and is distinct. Breaking free from exceptionalism for the 100th time, you come to your senses that Italian music is timeless in many ways. Even when we see younger Italian artists creating art that is or seems more western in style or lyric, It is still a substantial unique contrast. Italian music has no need to change or be like what is pushed around the world. So when we think of music in other languages, or even just from a different culture, perhaps we can give it more of a chance and when you do, the brilliance of being human is revealed again, you transcend the vail of language, culture, and otherness, and you too will see the sky in the room.

A student studying in Rome, loving the human experience.

Port Royal – Where Are You Now