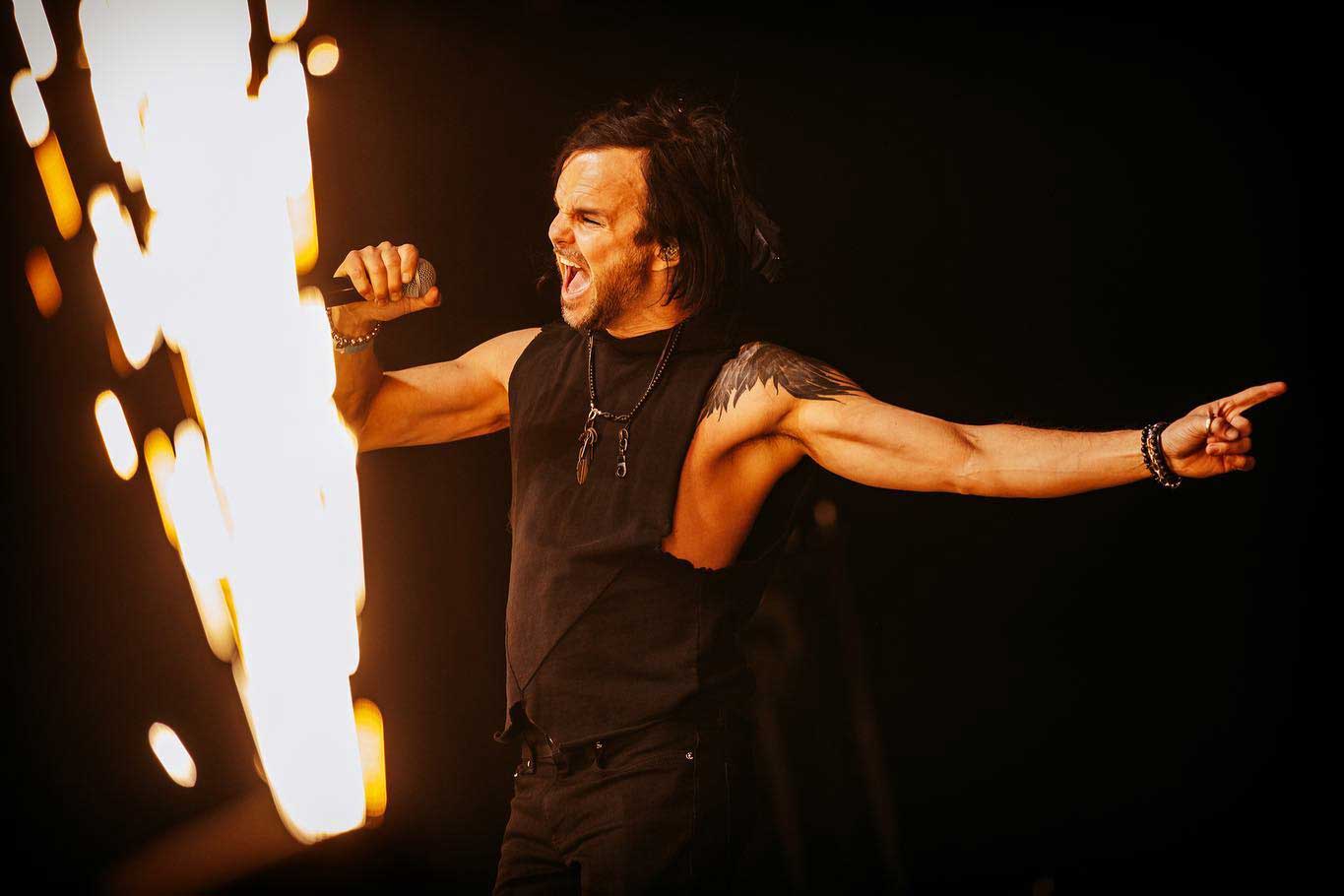 The Rasmus have released nine albums, played gigs all over the world, and won truckloads of awards for nearly 30 years now.

But this has been a turbulent period for the Finns. When founding member Pauli Rantasalmi quit the band abruptly back in January, the future seemed very uncertain. Yet new beginnings happen all the time. Like a bolt from the blue (or “a killer shark in heels”), Emilia “Emppu” Suhonen joined the band a bit later, to become a full-time member and bring the squad some luck and a sense of rejuvenation. Now, fresh from their triumphant win at the local qualifiers, songbird in charge Lauri Ylönen, “zooms in” from the most exotic of places, Hawaii, for a tell-all interview on their infectious Eurovision bid “Jezebel” and the inspiration he finds in Greece.

Tasos Papanagiotou: Hi Lauri, and thanks for this opportunity! You’ve been together for nearly 30 years now, won numerous music industry awards, and released 9 albums. You are one of Finland’s most internationally successful groups. What sparked your interest to join this year’s Eurovision selection contest? Was it a clear decision?

Lauri Ylönen (The Rasmus): Yeah, it’s a good question. First of all, a lot of The Rasmus fans over the years have been asking us “When will The Rasmus take part in the Eurovision?” and I always felt like “No way, that’s not a right place for us. I don’t even want to compete with that music”. That’s how I felt. But I think the competition vibe has changed, it’s now more for a band like us to join. During the last couple of years, there have been more rock bands there, it has become maybe more “serious” in a way, it’s not all about funny songs and “freaky things” anymore! (laughing)

Tasos Papanagiotou: I’ve read an interview recently where you said that Eurovision used to be “a joke”.

Lauri Ylönen (The Rasmus): Well, not a joke but it was a lot less serious. It was not for “real bands” to join, that’s how I was feeling, even ten years ago. But I think it has changed over the years. Now, after struggling with Covid for two years, I really wanted to do something, honestly! I just felt like “we can’t do concerts, I can’t travel, I can’t do anything of what I used to do, what I loved to do. So this was just an idea I got last summer, while I was actually sitting on this very balcony here in Hawaii. I was playing my guitar, writing the first demo of Jezebel, which became “the song”, that’s when I came up with the idea that we have to take part in this, we have to try and go to the Eurovision with The Rasmus! So I had a pretty clear vision that this is what we got to do and I’m happy that I had this vision. When something starts to happen, you have to be able to “see” a little bit of the future.

Tasos Papanagiotou: I know this has been a fast-paced period of changes for you guys with Pauli quitting the band and Emilia joining… almost “secretly” sometime before the official announcement. Have things been moving too fast for you to realize?

Lauri Ylönen (The Rasmus): No, not at all. It has just been a very wild ride since last summer when we had the idea for the Eurovision, and then a couple of months later Emilia joined us, which was a miracle in a way. We found her out of all the guitarists out there and she was just a perfect fit! She’s a talented musician and that’s great, but she also fits the group, maybe that’s because she’s Finnish and she’s from the same area. As a kid, she actually went to the same school as we did! She has the same kind of humor, the same kind of attitude towards things, the same values, so it’s like she “came home”. It feels like it’s been like this “forever”, though it’s only been a few months!

Tasos Papanagiotou: But the first success right after Emilia joined the band came when you were chosen to represent Finland in this year’s Eurovision. I think you can officially say that she’s your lucky charm!

Lauri Ylönen (The Rasmus): I would say so! She really brought the band back to life because about a year ago, we were really about to break up…

Lauri Ylönen (The Rasmus): Yeah. Pauli left the band, there was nothing happening with Covid for two years, and I had some personal issues in my life… a lot of negative things. But then about half a year ago something happened, and it’s been only good news since then. Sometimes you have to go low to rise up again. And this is really a new beginning for The Rasmus!

Tasos Papanagiotou: Jezebel was the brainchild of you and “the hitmaker of the stars” songwriter and producer Desmond Child. Desmond has worked with rock legends Bon Jovi, Alice Cooper, and KISS, and of course, also produced The Rasmus’ 2008 Black Roses album. So my question is why did you ask Desmond Child to work on your demo? Was that a decision to be in the right direction for a song that could be a potential winner for the Eurovision?

Lauri Ylönen (The Rasmus): Well, when I wrote the song, the first idea, maybe it reminded me of Desmond in some way, because I’ve learned so much from him! When I was a child I was listening to all these songs that he was somehow involved with, you know, from KISS to Alice Cooper, Bon Jovi, all the big hits sort of shaped my identity as a musician and a songwriter long time ago. So when I came up with the song I thought “I have to call him. He’s got to perfect this. Together we can make it perfect!”. I was actually here (in Hawaii) and I called him to say “Desmond, I have a great song, I need your help, now we’ve got to make it the best song in the world and win the Eurovision!” (laughing). And he was like “Ok, sounds fair! Come and see me in Folegandros.” So I caught a flight from Hawaii to Folegandros. It took me really 35 hours to get there! But it was a beautiful experience. We had been at Folegandros before. Desmond goes there every summer, that’s his “secret” hideaway.

Tasos Papanagiotou: If I remember correctly last time you were there was before “Black Roses” (The Rasmus 2008 album).

Lauri Ylönen (The Rasmus): Yes, we went there for the first time maybe about 12 or 14 years ago. So it was nice to return to Folegandros. With Desmond there, everything was like it was a long time ago and we really got back to work immediately. It’s a very inspiring place, the surroundings, the location. Kind of a remote island, small in population, and the altitude is high so the view over the sea is beautiful. I remember we wrote the song very fast, in less than 3 hours it was done!

Tasos Papanagiotou: Lauri, having seen this year’s Finnish competition and everyone, all entries, were performing on the highest possible level. Does this prove that there is an increasing interest for artists to take part or even win the Eurovision?

Also, after the success of Moneskin last year, there was a sudden shift of interest or focus back to rock music. Did the fact that Eurovision produce this major commercial success for the scene play a part in your decision to join the qualifiers?

Lauri Ylönen (The Rasmus): Yeah I think it had an impact on us too. If there was an idea before now it became clear, and the feeling much stronger. Because the mood overall in the Eurovision has changed over the years for the better, and it was perfect for our “comeback”, that’s for sure. And I think in Finland at least it’s probably the biggest music event of the year, especially now it was all over the news for 3 months, every day! So I’m guessing next year there will be twice as many Finnish artists competing! It’s such a great opportunity especially if you go further, if you win the national finals, to play your music in front of 200 million people. It’s an amazing chance!

Tasos Papanagiotou: I know your intention and your general mood had to be very different when you first applied to the competition and of course after you won in the selection process. How does it feel now having to compete in a European song contest when the European continent is going through its own war?

Lauri Ylönen (The Rasmus): There are mixed emotions because at the same time you feel bad when you think of “happy things”, of playing music, of being joyful while at the same time there is a war going on. Very close to Finland actually, about 100 kilometers away from Helsinki. This makes you feel really sad. On the other hand, I was talking to an army specialist, someone I met recently, and he told me that it’s very important that artists keep playing their music because in times of crisis there has always been music that helps people to go through it all. And that we all need other things to think about. Of course, if you see the news every night, there is at least one full hour of madness, and you can’t close your eyes from it. You have to see it and learn from it, but at the same time, you need some “amusement” that lets you have some happy thoughts. So I think this Eurovision comes at the right time and place.

Originally Eurovision was founded after WW2 so that countries of Europe could unite, so what better timing than now. Also, I’m happy that Ukraine is on board and that they have a great song, and although I don’t know what they’re singing about, I understand very possibly that they are going to win the whole thing! They are going to get a lot of love from people voting for them just for the matter of all the things that are going on in their country.

Tasos Papanagiotou: Let’s hope that even for one night, it can bring some joy to us all. Let me end it on a high note here and ask you guys what’s your best or craziest memory from playing in Greece, also what how did Greece and… Folegandros inspire you to create new music?

Lauri Ylönen (The Rasmus): Greece has a special place in our hearts, especially mine. I went to Greece… I think it was the first trip outside of Finland I ever did with my family when I was 9 years old. We went to Chania! I love the country, it’s so beautiful, rough but pretty at the same time. Love the contrast. The Nature is very “brutal” in a way, very dry. Then it still feels different when you have the sea around you everywhere, so many islands, thousands of them! (laughing). It’s so inspiring for us, we have written so many songs in Greece it’s crazy! And that’s because of Desmond. It was his idea for us to be there, to spend the summers and travel to Folegandros a few times already. I would say this is the best thing we remember from Greece, Folegandros “the magical paradise”!

A seasoned creative copywriter in Advertising, completely gaga over all things music.

Flõstate – One More Day In Love

Music, Rock, Track of the day

Music, Video of the day, Videos